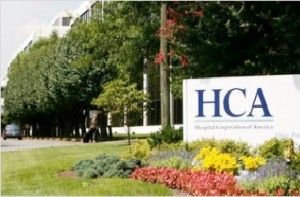 U.S. District Judge Kevin Sharp in Nashville, Tennessee, rejected HCA’s claim that the plaintiffs had missed “multiple opportunities” to learn more about the company before buying their shares, including from media reports, conference calls and disclosures during the IPO road show.

Class certification can make it easier to pursue larger recoveries at lower cost than through individual lawsuits. Sharp’s decision is dated Sept. 22.

Shareholders alleged that HCA, its directors, its former private equity sponsors and its investment banks concealed how the company was seeing adverse trends in Medicare revenue including cardiology, and Medicaid revenue per admission; and accounted improperly for a 2006 reorganization and a 2010 restructuring.

The IPO had been the largest by a company owned by private equity firms. HCA had been taken private in 2006 by a group led by Bain Capital, Kohlberg Kravis Roberts & Co and Merrill Lynch Global Private Equity in a deal valued at approximately $33 billion.

The shareholders said that by the time HCA was sued on Oct. 28, 2011, after additional disclosures, HCA’s share price had fallen as much as 43 percent from its $30 IPO price.

“Given defendants’ alleged violation of the federal securities law and its impact on a large number of geographically dispersed investor(s), a class action is the superior vehicle for adjudication of the claims,” Sharp wrote. “The alternative would be to have (potentially) thousands of individual actions, which is likely impractical for most investors, and which would risk burdening the judicial system.”

The class includes shareholders from the March 9, 2011, IPO to Oct. 28, 2011. Sharp did not address the lawsuit’s merits. The lead plaintiff is the New England Teamsters & Tracking Industry Pension Fund of Burlington, Massachusetts.

“We’re quite happy with the decision,” said Scott Saham, a partner at the law firm Robbins Geller Rudman & Dowd representing the union pension. “It is a very important case, at its center focusing on a for-profit hospital company that was using unnecessary procedures to bolster earnings and revenue.”

Ed Fishbough, an HCA spokesman, said the Nashville-based company will continue defending vigorously against the claims, and may appeal the class certification to a higher court.

Jonathan Stempel is a correspondent for Reuters in New York.