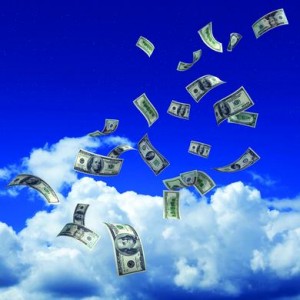 Back in the day when Al Gore was inventing the internet, some bright spark struck about the idea of representing the information super-highway as a cloud in computer network diagrams, presumably because they’re both large, nebulous and without anything really tangible to grab hold of. That, and they’re easy to draw.

It means, essentially, utility computing, a way to increase a company’s IT capabilities without having to buy new infrastructure, software or people. There is no local server the user is accessing but rather drawing on servers and other resources over the internet in real time.

Cloud computing is a small margin business, and Amazon, the masters of working a small margin business, is currently the world’s lead provider. The US online retailer had been using its own form for years and has worked on building the IT infrastructure of the online businesses of a number of other companies, including the likes of British high-street stalwart Marks & Spencer.

The company eventually realised what a large market there was for such internet-based resources and now offers a range of cloud computing services, for a fee. There is no set way that cloud computing companies charge. Some will charge a subscription fee, others a pay-per-use or rental fee.

One of the latter is Salesforce.com, probably the most successful of all companies in the cloud computing sky, which provides customer relationship management application for sales and marketing departments via a web browsers.

It began in 1999 and is now held up as the poster child for cloud computing. It’s the perfect example of how successful a company operating in the sector can be when it gets it right. Backed by a range of VCs and angel investors, Salesforce.com is a now a listed company, bringing in revenues of US$276m as of Q3 2008, up 43% year on year.

It is the epitome of what is attracting investors to cloud computing – low start-up costs and high scalability. Index recently led a US$13m in Rightscale, a US business that provides a software administration services to help companies determine how much time, computer space and memory they need to use from a cloud computing provider like Amazon.

For Rimer, “cloud computing is the next level in user efficiency and innovation”, a step up from open-source. “Open-source means users are not shackled to one provider, it has high-scalability and has low running costs,” he says. “All this applies to cloud computing, only it takes it further to ‘elastic computing’ where the user only pays for what they need.”

Rimer is enthusiastic about the future of the space: “We are very active and expect more investment in this space. We don’t buy companies with the explicit aim of later selling them to other companies. We try to build stand-alone businesses and we believe that the cloud computing is capable of delivering these.”

There is similar excitement over at fellow UK VC SEP. Partner Stuart Paterson says: “If you can produce an application that consumers really love, it can grow really quickly. With cloud computing, you can scale these companies incredibly quickly, and it’s all done over the internet. There’s no need to set-up offices all over the world or hire an army of salesmen.”

To prove his point he cites Seatwave, an online marketplace for buying and selling tickets for live events, which has been backed by Atlas Venture, amongst others. This is now bringing in revenue of £20m. Then there is Betfair, the online betting exchange, which reported 2007-2008 profits of £11.9m. Both of these companies use cloud computing.

SEP itself has a number of companies it is growing, like Zeus, which has created infrastructure which supports the way cloud computing works, and Skyscanner, which utilities cloud computing in its flight search engine.

Both companies have a way to go before an exit can be considered – Skyscanner is a particularly recent addition to the SEP portfolio, added at the end of 2007 – but Paterson is confident that the M&A activity we are seeing now – Sun Microsystem kicked off 2009 by buying Belgian cloud computing company Q-layer – will continue.

The problem with the latest hot sector and tech buzzwords is that there is a risk everyone and their lawyer piles in and make a mess of things. Over the next five years, spending on IT cloud services is expected to grow almost threefold, reaching US$42bn by 2012, according to industry research firm IDC. The successful VC will be the smart VC, and this generally comes from experience, for its takes a firm whose managers have been through the wars, lived and invested through the bad times as well as the hood, to separate the wheat from the chaff.