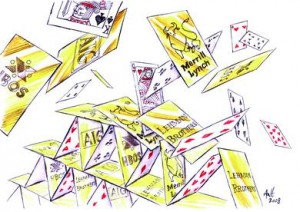 I was on the Greek island of Lesbos for my annual holiday this month. When I left Gatwick, the grey skies were just beginning to give up some of its rainy baggage whilst I hoped that First Choice wouldn’t lose mine. Two days later, half of the UK was underwater.

Just over a week later I proposed to my girlfriend and handed her over a sizeable portion of my savings (about £30, but don’t tell her that) in the shape of a diamond. The next day Lehman Brothers collapses and the financial markets are thrown into turmoil.

Now I’m not suggesting that what goes on in my life is somehow connected to what goes on in the world at large – although I do vaguely remember planning to grow a beard the day before Saddam Hussein was captured – but let’s just say it’s been quite a fortnight.

If I was feeling lazy, here is where I’d make some clumsy metaphor linking the banking crisis and the weather – how does “Panic floods market after Lehman storm” grab you? – but it is clear that everyone has been shocked by the sheer ferocity of recent events.

Many were predicting that the good times couldn’t last but very few thought it was be this severe. Less of a credit crunch and more of a credit quake. The fall of such a Wall Street giant like Lehman – seemingly inevitable in hindsight – was something no-one had foreseen, not even surely private equity sage Jon Moulton, who has been warning about impending doom for quite a while.

In an article on page 7 we get some advice from the Alchemy Founder on what the industry can do whilst the financial world collapses around it. Despite protestations from some, private equity at all levels is affected by what’s going on, be it in terms of deal flow, divestments or fundraising, not to mention defaults.

Moulton’s words of wisdom – including a demonstrable lack of sympathy with those fund managers who bought “rubbish” – date from February, but they are arguably even more appropriate now than they were then. Private equity hasn’t really faced an economic climate like this before, certainly not in Europe. The last severe recession Europe faced was in the early 1990s, at which point private equity didn’t really exist here.

This is a true test of the industry’s mettle – is it one which panics? Is it strong enough to withstand the economic pressures? Are we going to see private equity firms shape up the challenge and weather the storm, or will the whole industry come crashing down like a house of cards? Fasten your seatbelts….