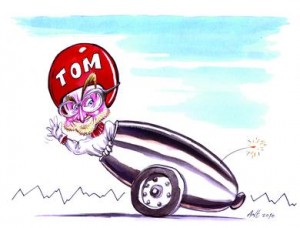 It’s all changed so much over the last six years. Back then, Apax had just been awarded European venture house of the year, Exponent had just launched with a £400m fund, Brian Larcombe had resigned as CEO of 3i, Dragon James Caan set up Hamilton Bradshaw and Anne Glover had taken over the chairmanship of the BVCA.

I joined EVCJ when private equity was seen as a rather odd and opaque backwater by the investment community. No-one really knew what it did and those working in private equity seemed in no rush to change that. Since then I’ve seen it move from niche to mainstream, from small fry to all-conquering behemoth. In under three years private equity became the biggest thing in finance, raising phenomenal sums of money and buying companies for eye-watering amounts, so much so it transcended this rarefied world and drew the attention of the mainstream media and subsequently fell into the political cauldron.

Since then of course, things have slumped and now the private equity world finds itself in a very tough fund raising environment, with exits hard to come by and investments few and far between. I’ve seen an entire cycle during my time at EVCJ and now it’s time for me to draw it to a close.

This will be my last issue at EVCJ and it’s been quite a ride. Private equity now finds itself in a position to establish itself as genuinely conventional instrument of asset allocation, to do away with the ‘alternative’ tag it has been lumbered with for so long. It’s an industry that has been forced to grow up very quickly and now it’s come out of its distortingly popular, and aggressive, phase, it’s poised to settle down and mature, to become an accepted avenue of investment rather than one seen as a niche – as it was back in 2004 – or one regarded as an overwhelming giant – as it was in 2006/07.

Whilst the activity levels will remain low in 2010 and the eventual pick-up will almost certainly not lead us back to the halcyon days of three years ago, the industry will settle, it will become mainstream, it will be mature.

Rather like me I suppose: I started at EVCJ as a mid-20s bachelor still living at my parents. I leave EVCJ married, with a mortgage. We all have to grow up, and private equity, married to regulation and leveraged up the hilt, is no different.