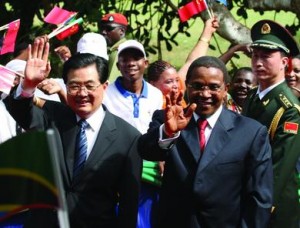 China and Africa may seem unlikely bedfellows, but the two have been trade partners since antiquity. As early as the second century BC, the Egyptian Queen Keliaomotela wore a coat made of silk from the Han Dynasty of China. Far more recently, between 1970 and 1975, China, a developing country itself, funded the construction of the Tazara Railway to serve landlocked Zambia through Tanzania as an alternative to rail lines via Rhodesia (now Zimbabwe) and apartheid-controlled South Africa. About 50,000 Tanzanians and 25,000 Chinese worked to build the historic railway. The total costs were about US$500m, making it the largest foreign-aid project ever undertaken by China. In this decade China has signed Bilateral Trade Agreements with more than 40 African countries and relieved a total of CNY10.9bn Yuan of debt from 31 African countries and provided duty-free treatment on 190 export commodity items from Africa.

Mark Fung, general counsel of the CADF, says. “We travelled to Malawi and saw a cotton farm. We, as an investment fund, don’t know much about cotton but we invited China Cotton to visit the farm with us and its staff was instantly able to recognise better planting techniques that could increase yield. They also set up a cotton seed oil pressing facility on site which increased the profitability of the farm significantly.” China Cotton and the China-Africa Development Fund co-invested in the business.

So far US$1bn has been allotted to the CADF from the Chinese Development Bank, but only US$100m was invested, in Ghana and Zimbabwe and Malawi. It is difficult to deploy large amounts of capital in Africa as businesses are quite small and capital needs are limited.

Other private equity houses have addressed this issue by building green-field businesses from scratch. Citadel Asset Management, a Cairo-based PE house, has been a large proponent of the ground-up business model for the region.

The CADF has not broached this idea yet but with US$5bn to deploy it is a plausible evolution of the funds strategy. The fund has no investment restrictions but it mainly concentrates on agriculture and manufacturing, which are priority areas as the CADF sees them as the base for African development. It also invests in infrastructure assets and basic industries, such as energy, telecommunication and transport. The third area that CADF strives to support includes oil and gas resources and minerals, and the fourth is the Industrial Park project run by Chinese enterprises in Africa. Fung says: “Tax free and economic zones in China helped create an economic boom in the country and we would like to deploy the same technique in Africa.”

Despite the deployment challenge for such a large fund in Africa, the CADF also faces a cultural challenge to using the private equity model; the proclivity to manage by committee.

Since the opening of Fund on June 26, 2008 it has reviewed more than 50 projects in nearly 30 African countries. Some of these projects have completed the due diligence stage, and will soon be submitted to the decision-making committee to consider whether or not to invest. Once approved by the committee, the follow-up stage will be carried out soon as possible. By the end of the year only two or three investments were made.

Fung says: “We use a Chinese cultural approach to risk taking. Chinese culture is risk adverse, which is why we have such a high savings rate. Our process is very deliberative because at the end of the day there is a very detailed trail, from inception to everyone that signed off the decision. Chinese funds have centralised leadership and investment decision-making for Chinese funds is slow – typically a three to six-month lead time. The deliberative body offers a distinct advantage. For example, the fund didn’t suffer from the commodity price boom in Africa because we took our time over the investment.”

The CADF is using the international private equity model for investment but tailoring it to perfectly fit the fund. As the Chinese Development Bank is the fund’s only investor there is no pressure to deploy capital, though Fung is aware that until the first US$1bn allotment is spent there won’t be more funding coming forward.

So far in 2009, the fund is on course to invest another US$300m and has already bankrolled Ethiopia’s first glass factory and is opening a South Africa office. The China-African Development Fund aims to complete the US$1bn capital investment as soon as possible for the fund raising for Phase II and Phase III to commence so that the Fund’s size will ultimately achieve US$5bn.