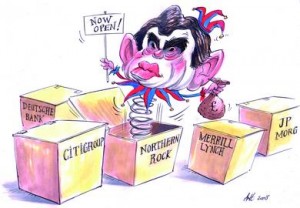 Following the abrupt change in market conditions in the second half of last year, primary activity in the debt markets has come to a near standstill and is likely to stay that way while a backlog of approximately €66bn of leveraged loans continues to languish on arranging bank’s balance sheets. Since the beginning of the year, the few deals that have been syndicated have largely comprised small to mid-cap relationship-style bank transactions.

The numbers paint a very clear picture of the continuing extent of the problem. Across the world only 102 buyouts have been completed so far in 2008, for a total value of $7.8bn. That’s down 73.2% from the $29.1bn mark this time last year, according to .

M&A activity by LBO-backed portfolio companies looks marginally better, but much of this will have been paid for from portfolio company balance sheets. That figure stands at $14.6bn so far in 2008, down 69.52% from the $47.9bn worth of deals completed this time last year.

Further exacerbating conditions, the recent peak in the , the high yield bond credit default swap index, which breached the 600bp mark last month to open at a new record of 611bp has delayed any further possibility of a recovery of the debt markets. The cost of insuring the debt of the 125 investment-grade companies in the benchmark iTraxx Europe rose by more than 20% to as high as 136.9 basis points.

The cause for the swing wider in credit default swaps was news that , a leveraged mortgage investor and listed affiliate of private equity giant KKR had delayed debt repayment of billions of dollars of commercial paper for the second time and engaged with lenders to allow for restructuring discussions. The news, however, is just the latest event to undermine confidence in the credit markets, adding to the weight of negative sentiment.

This confidence will clearly also be shaken by further external shocks to the system such as the recent turmoil at and the announcement last month by the Government that , a major casualty of the current downturn, is opening its doors to the public in the first nationalisation of a sizeable British bank in a quarter of a century. And while rumours persist in the market place that there is more bad news to come from the larger investment banks, the inter-bank market is likely to remain dormant.

Given the congestion in the debt market, there will be precious few large deal completions. So for the moment everybody’s talking about smaller, less debt-dependent deals and the current darling of private equity – the mid-market – as the place to be which has witnessed a flurry of fund closes recently, mainly in the UK – see our feature this issue page 32.