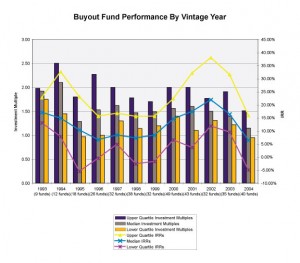 Our review, now in its third year, looked at performance data for some 400 North American, South American, European and Asian buyout vehicles formed from 1981 to 2004. Our source: fund returns published by eight public pension funds. To come up with our top-quartile list, Buyouts separated the 311 capital pools with reported investment multiples and ranked them in descending order to obtain our top-quartile figure. Including ties, 79 individual funds made the cut, with investment multiples ranging from a floor of 2.00x all the way to more than 6.00x (see accompanying table).

Much of the list reads like a who’s who of the mega-market, including multiple mentions from ., and . Still, the two most successful funds on a total return basis belong to small and mid-market managers and .

Coming in second place was the Leonard Green & Partners-managed , vintage 2003. During the previous recession, the Los Angeles buyout shop teamed up with the to form the $50 million investment vehicle to invest in California-related industries and underserved markets. Today that fund has an investment multiple of 5.50x.

A number of firms have more than one fund on our all-time top quartile list, but only a handful have three or more. Not surprisingly, industry forbearer KKR was the most represented, with eight top-quartile funds, although the most recent were a pair of 1986 vehicles—KKR 1986 Fund and KKR Beatrice—which generated investment multiples of 4.55x and 3.58 respectively. The has five top-quartile funds on the list, the most recent being its vintage-2003 , which is managed along with . That fund sports an investment multiple of 2.30x. Firms that had three all-time top-quartile vehicles include Luxembourg-based mega firm , consumer specialist Leonard Green & Co. and Houston-based energy specialist .

About a quarter of our top-quartile performers date from vintage years 2001 though 2003, the period of recession after the bursting of the tech bubble, the 9/11 terror attacks, and the corporate fraud cases of Enron and WorldCom. The strong performance of that period bodes well for funds that are getting off the ground in today’s recession, providing more incentive to brave today’s difficult fundraising market to fill new kegs with dry powder.

Since 1989, every vintage year in our study is represented by at least one top-quartile fund. That is, until 2004, the youngest fund class to be included in our annual study. Perhaps not coincidentally, 2004 is also the year the market began heating up again after the previous recession. That said, given the 10-year life of most buyout funds, it’s likely that some funds raised in 2004—now midway through their life-spans—will soon find their place among the industry’s strongest performers, too.

Indeed, the top two performers of the vintage-2004 class are already treading close to the 2.00x barrier. Portland, Ore.-based ’s fourth fund, , has already returned 1.93x invested capital to the . As an aside, Endeavour Capital’s third fund, raised in 2000, ranked 35 in our study with an investment multiple of 2.49x. Elsewhere, Salt Lake City, Utah-based ’s 2004 inaugural fund, , has already given back 1.90x its invested capital, according to CalPERS.

Interestingly, both fund managers have uncannily similar geographic investment strategies. Founded in 1991, Endeavour Capital invests in small to mid-market companies located in the western United States, while five-year-old Sorenson Capital makes buyout and growth equity investments in small to mid-sized companies primarily based in the mountain and western regions of the United States.

Just over half, or 52 percent, of all funds featured in our top-quartile list are U.S.-focused vehicles. Funds with an opportunistic global focus made up 22 percent of our roster, while those that targeted deals in the European region made up another 20 percent. The remainder includes a mix of investment vehicles targeted toward investments in Asia, Canada and South Africa.

Other highlights from our compensation study include t he following:

• Despite the different investment approaches of the eight LPs whose funds we compiled, the median buyout fund investment multiple for each investor that reported that performance metric landed in a narrow band between 1.45x and 1.57x (see accompanying chart);