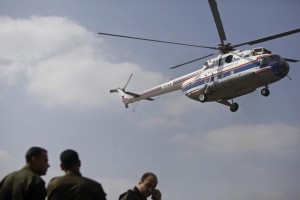 KKR, a New York-based private equity firm, has prevailed over other buyout firms in the auction for Air Medical and is now in the final stages of negotiating a deal with the company’s owner, Bain Capital LLC, the people said on Tuesday.

The sources said a deal could be announced as early as this week and asked not to be identified because the negotiations are confidential. KKR and Bain declined to comment, while an Air Medical representative did not immediately respond to a request for comment.

Based in Lewisville, Texas, Air Medical operates a fleet of 222 helicopters and 25 airplanes from locations in 27 states. It provides emergency transportation services to more than 75,000 critically ill patients annually.

KKR, which has $96.1 billion in assets under management, has invested in helicopter businesses in the past, including Weststar Aviation and Avincis. It is also a major investor in the healthcare sector, and its deals include Panasonic Healthcare Co and HCA Holdings Inc.