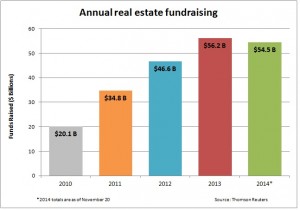 Tapping into a rebounding U.S. economy and opportunistic investments in Europe, private equity firms appear to be on track to post the best fundraising year for real estate pools since at least 2010, and the trend may continue next year.

“Real estate has been one of the stronger performing sectors across all the various equity classes over the last 10 years,” said Jason Post, senior vice president at LP advisory firm Meketa Investment Group. “With 500 managers trying to fundraise you have to differentiate by specializing and focusing on geographies or by having a brand name that’s able to raise capital in an efficient manner.”

Among the firms that raised the most capital for real estate deals, Lone Star Funds raised $7.4 billion, Blackstone Group pulled in $4.7 billion and Starwood Capital Group locked down $4.2 billion, according to fundraising data from Thomson Reuters.

Overall, fundraising continues to favor bigger names, with the average time on the road taking two years for smaller funds.

“These folks are really gravitating toward familiar names,” said one middle-market GP in the real estate space. ”Blackstone, Starwood, Carlyle and TPG Capital are getting traction because they’re known.”

Looking ahead, Post of Meketa said the fundraising bonanza for real estate is likely to continue in 2015. At least one fund in the market will be Blackstone Real Estate Partners VIII LP, which hopes to raise $13 billion, according to a Reuters report.

Playing off the surge in fundraising activity around real estate, Blackstone Group and Carlyle Group both marked multibillion dollar milestones in their capital-raising efforts.

After launching in 2013, Blackstone Real Estate Partners Europe IV is about two-thirds invested or committed after one year, the firm said.

“We were waiting for the European real estate sales to break open and it did and we were ready,” Stephen Schwarzman, Blackstone’s chairman and CEO, said on an Oct 16 conference call with Wall Street analysts.

Blackstone said the fourth European real estate fund is not done fundraising yet, and will grow by 1.5 billion euros, or about $1.9 billion, to bring the total size to $8.8 billion, about $1 billion more than the firm disclosed in its most recent Form D filing for the fund.

As for the United States, Blackstone said its real estate portfolio is operating in positive fundamentals across every sector of its portfolio.

In its third-quarter update, Carlyle Group said it took carry for the first time on Carlyle Real Estate Partners IV, which raised $2.3 billion, with a fund inception date of September 2010.

During the quarter, the firm raised more than $3 billion for various real estate funds. It’s deployed at least $2.4 billion in the past year into “what we expect to be great long-term energy and real estate opportunities,” David Rubenstein, co-CEO of Carlyle Group, said on Oct. 29.