Debt levels on large US buyouts are approaching heights not seen since the peak era in 2007.

Leverage levels on large U.S. leveraged buyouts in the third quarter hit the highest debt-to-EBITDA ratio since the global financial crisis, according to research from LCD, an offering of S&P Global Market Intelligence.

“Market conditions are very favorable to borrowers at the moment,” said Marina Lukatsky, a director with LCD. 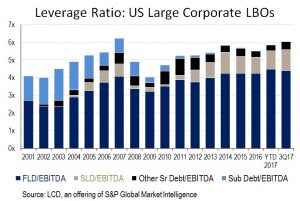 What’s different today from the peak environment in 2007 is that there is less subordinated debt in the capital structure, LCD found. Leverage through first lien bank loans is higher today, Lukatsky said.

“From the deals we see, because of market conditions borrowers can get deals with more senior debt in the structure,” she said. “Borrowers are able to get larger deals syndicated in the larger leverage market.”

According to LCD, first-lien senior debt makes up the bulk of the capital structure, coming in at more than 4x EBITDA, which has been the case since 2014. Second-lien debt encompasses a smaller portion, and then other senior debt balances out the structure.

Subordinated debt was not present in the capital structure of large LBOs in the third quarter, LCD found. That was the case for the full year 2017 and for 2016, according to the data.

Terms on leveraged financing have loosened, LCD said. “Lenders are being pushed into a covenant-lite environment by borrowers,” said Basil Karampelas, managing director in BDO’s Business Restructuring and Turnaround Services practice. This is a function of the ultra-competitive lending environment, Karampelas said. “There’s a tremendous amount of capital chasing deals,” he said.