Major enforcement actions and other regulatory declarations have not motivated many general partners to publicly disclose their use of accelerated monitoring fees, a Buyouts analysis of SEC filings has found.

Blackstone Group’s failure to properly disclose accelerated monitoring fees to its fund investors resulted in a $39 million settlement with the SEC in October. This was widely expected to lead many firms to make disclosures about how they treat accelerated fees.

However, at year end — and more than 18 months after former SEC Director Andrew Bowden highlighted the practice in his “spreading sunshine” speech — more than 80 percent of private equity firms do not publicly disclose whether they accelerate fees charged to their portfolio companies, according to Buyouts’ analysis of SEC records.

“Firms with good counsel — after Bowden’s speech — would have done something, but some GPs just don’t listen or don’t call,” said one attorney who handles compliance issues for general partners.

Up to 17 percent of funds in the market at year-end were managed by general partners that disclosed the ability to accelerate fees, according to Buyouts’ examination of publicly filed Form ADVs.

Of the 220 firms in our sample, 28 included language around fee acceleration in public filings (several firms had multiple funds in the market at year-end). Another seven firms used broad language to describe their control over the rate, timing and amount of fees charged to portfolio companies. 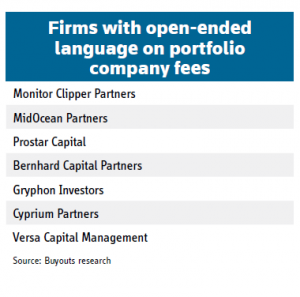 It’s not clear exactly how many firms actually charge accelerated monitoring fees. The practice is not widely tracked and it does not appear any organization publishes data on the issue. A recent University of Oxford and Frankfurt School of Finance & Management study of 592 leveraged buyouts suggests firms charge these fees on 28 percent of exits. The study, which was written by Ludovic Phalippou, Christian Rauch and Marc Umber, also determined “a majority” of the contracts GPs sign with portfolio company executive teams include a provision for acceleration. This means many firms forego their option to accelerate fees, according to the study.

The SEC continues to focus on the issue after the Blackstone settlement. In a February filing, The Carlyle Group reported that the SEC requested “additional information about our historical monitoring fee acceleration practices.” Apollo Global Management reported a similar request from the SEC in November. Both firms said they are cooperating fully with their respective requests.

Apollo, Blackstone and Carlyle Group declined to comment for this story.

At issue is a practice many firms kept “hidden” from LPs for years, Bowden said in his speech. Private equity firms collect fees from their portfolio companies in exchange for monitoring or advisory services. These arrangements are outlined in management service agreements, which often extend for 10 years or longer. If the firm sells or exits the company before the contract runs out, some general partners will charge the company for fees it would have collected through the end of the contract.

The practice, often referred to as acceleration, diminishes the value of the portfolio company upon exit. If accelerated fees do not offset management fees paid by fund investors, it can also harm limited partner returns.

“I remember when they did that to me the first time, I was just so upset,” said one LP, describing accelerated fees. “I don’t know how they can justify it, in my mind.” 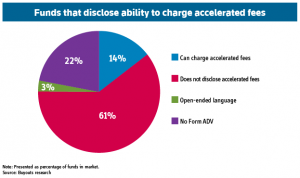 The SEC’s main concern with accelerated fees relates to how and when firms disclose them to their LPs. In Blackstone’s case, the firm disclosed its ability to charge monitoring fees, but it didn’t say anything about accelerating fees until after the fact, according to a summary of SEC’s findings. Blackstone did not admit or deny the findings.

Bowden’s speech, along with the Blackstone settlement, likely spurred some firms to add specific language to their Form ADVs to account for accelerated fees they plan to collect or already collected, several sources told Buyouts. Many firms believed they were covered by existing language in publicly filed Form ADVs, sources said.

Some firms included broad language to capture a wide range of fees and expenses. For example, Monitor Clipper Partners’ Form ADV states that the firm and its affiliates have “discretion over whether to charge transaction fees, monitoring fees or other compensation to a portfolio company and, if so, the rate, timing and/or amount of such compensation.”

This does not mean Monitor Clipper accelerates fees, but it does provide the firm with wide berth over the range of fees and the rate at which they’re accrued.

As one mid-market GP put it: “Any firm that has a control strategy, unless they have a provision in their LPA that they wouldn’t do that [accelerate fees], can more or less do what they like. And that provision would be unusual if it was there.”

What is clear to most sources is that the practice is more common as a component of larger leveraged buyouts. Firms typically accelerate fees when a business exits through an IPO, according to the recent University of Oxford and Frankfurt School of Finance & Management study. This means acceleration is most relevant to mega-firms like Blackstone, KKR and TPG, all of which include information about it in their filings.

That said, more than half of the GPs who include language about accelerated fees in their Form ADVs were middle-market shops raising funds targeting $750 million or less. When contacted by Buyouts, several of those GPs claimed they would never accelerate monitoring fees and have not done so in the past. Many said they were instructed to include the language about accelerated monitoring fees by outside attorneys as a preventative measure.

“I don’t write it. Kirkland [& Ellis] writes it,” said one small market GP, adding he would prefer his firm’s Form ADV to cover as many scenarios as possible. “Why not put it in? You can disclose my shoe size if you want.”

Furthermore, in private fund agreements, GPs vary in the level of detail they provide in their disclosures. Prior to the Blackstone settlement, many firms assumed the phrase “monitoring fees” encapsulated accelerated fees as well, said one chief compliance officer at an upper-middle-market firm.

While many sources said their firms had curtailed accelerating fees, the practice does persist. In its Form ADV, Silver Lake wrote it would “likely in the future” accelerate fees charged to portfolio companies in the event of an initial public offering. A chief compliance officer at another firm with more than $10 billion under management said his firm would also do so, but only when it retained a minority stake upon exit.

There are certain instances in which LPs said they would prefer their GPs to accelerate monitoring fees or, at the very least, are ambivalent about the practice. In cases where fees charged to portfolio companies offset LP management fees, acceleration can effectively provide a discount to fund investors.

Even so: “It’s very difficult to justify,” said the general counsel at one upper-middle-market firm. “How can you justify a $10 million fee on work you’re not going to do?”

In any case, multiple sources were adamant the SEC’s enforcement action against Blackstone sent a clear message to the industry. After Bowden’s speech, Blackstone told limited partners it would halt the practice in mid-2014, The Wall Street Journal reported. Igor Rozenblit, the co-head of the SEC’s private funds unit, encouraged other firms to follow suit at a 2014 conference, Reuters reported.

“There’s going to be pressure for them not to do this anymore,” said Professor Steven Kaplan of The University of Chicago’s Booth School of Business. “I can predict they will do less of it and they will disclose it more clearly.”

Form ADVs for 53 firms were not available. Many smaller firms do not register as investment advisers because they do not meet the SEC’s threshold for minimum assets under management ($150 million).

Firms typically detail practices for accelerated monitoring fees in sections relating to fees and compensation or risk. Firms with explicit language detailing acceleration of fees were checked as having an ability to charge accelerated fees.

Buyouts conducted roughly two dozen interviews with limited partners, fund managers, attorneys and compliance experts and reviewed approximately 150 public filings for this story. Most firms did not respond to requests for comment. Many sources declined to comment on the record, citing concerns with speaking publicly about legally sensitive fund agreements and other compliance-related issues.

Photo: Stephen A. Schwarzman, chairman and CEO of The Blackstone Group, speaks during an interview with Maria Bartiromo, on her Fox Business Network show in New York February 27, 2014. REUTERS/Brendan McDermid

Correction: An earlier version of this story included a pie chart incorrectly identified “Cannot charge accelerated fees” as a category. The correct category is “Does not disclose accelerated fees.”