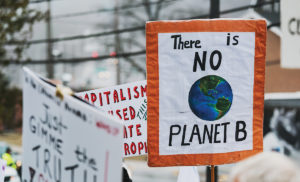 The Lightsmith Group is a private equity firm, but with a different mission from that of most other shops.

“Adaptation or climate resilience refers to adapting and preparing society and the economy to respond and recover from the effects of climate change,“ Koh told Forbes in an interview last year.

Lightsmith has identified a pipeline of businesses that fit this strategy in sectors like weather and agricultural analytics, disaster risk modeling and water solutions, according to a report from Nordic Development Fund.

“We have identified 20 sectors of the economy representing $130 billion of current market size related to resilience to climate change. Those market segments are already growing 20-30 percent per year. We believe they will grow even faster to address the need and demand generated by climate change,” Koh told Forbes.

Investments could target companies involved in climate change risk analysis, healthcare related to problems arising from a changing climate, and agriculture technology, the Wall Street Journal wrote about Lightsmith in 2017.

Lightsmith believes investments in these areas can produce strong returns for investors while having an impact on climate change.

“These outcomes are complementary, or win-win. The faster these technologies and solutions grow, the more capacity we will have to deal with climate change,” Koh said last year at Nordic Development Fund’s 30-year anniversary event in Helsinki.

To capitalize on these opportunities, Lightsmith launched its debut fund targeting around $500 million, sources told Buyouts. It’s not clear how long the fund has been in market or how much it has raised so far.

Lightsmith is working on its first investment, one of the sources told Buyouts. Koh declined to comment citing regulatory restrictions.

Koh formed Lightsmith Group in December 2016, according to his LinkedIn profile. Before, he worked for about four years as a managing director and partner at Siguler Guff from 2012 to 2016, his profile said.

Koh runs Lightsmith with co-founder and managing director Sanjay Wagle, who worked at the US Department of Energy as a renewable energy grants advisor from 2009 to 2010. Wagle also worked as a principal at VantagePoint Venture Partners from 2005 to 2009, his profile said.

The firm also includes Richard Kauffman, whose résumé around climate change dates back years. Kauffman most recently worked as chairman of energy and finance for New York overseeing the state’s energy agencies and its transition to go 100 percent carbon-free by 2040. In 2015, he served as New York’s lead delegate in Paris at the UN Climate Change Conference.

He also worked as senior advisor to Secretary Steven Chu at the US Department of Energy, overseeing the restructuring of the agency’s loan and development of debt and equity energy policies.