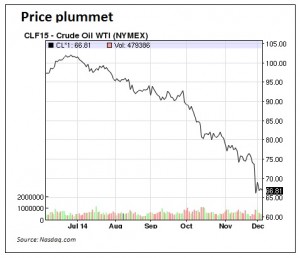 Global production is currently running about 1.3 million barrels per day greater than demand, David Miller, managing partner of EnCap Investments LP, said at the Buyouts Texas conference Dec 3. With oil dropping to below $70 a barrel, oil fields where economics work at $60 a barrel remain in demand.

But overall, lower prices and higher supply have caused the “door to slam shut” in equity capital markets for energy ventures. Lower oil prices have also cut down the value of reserves in oil and gas fields, causing sponsors to re-evaluate the value of target companies.

The price for a barrel of U.S. crude hit $66.81 on Dec 4, down from more than $90 just a couple of months ago, according to the New York Mercantile Exchange. The price drop was precipiated by Saudi Arabia announcing “deep discounts for the crude it sells Asian and US buyers in an apparent attempt to defend market share,” Reuters reported.

“The greater damage is in the value of assets,” Miller said. “Now is not the time to sell upstream assets. Every (purchase) deal is in the process of being renegotiated.”

“This is an environment where you don’t want to be exiting, but if you can deploy capital and make a return, you want to do that,” Karkkainen said. “This has happened before… Let costs come down, get back to basics and work your way through the environment. It’ll pass.”