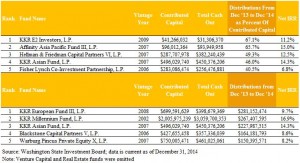 Last year was a good one for distributions for the Washington State Investment Board. In the twelve months, the pension realized a little over $4.0 billion in year-over-year distributions from its buyout portfolio.

KKR dominated the absolute distribution list by winning, placing and showing. KKR European Fund III LP landed atop the board with its near $281.2 million in distributions during the year Coming in second was the KKR Millennium Fund LP. The 2002-vintage fund paid out $267.4 million to Washington last year. KKR’s Asian Fund came in third, returning about $228.0 million. It also placed fourth in distribution percentage (46 percent) and is the only fund to appear on both lists. The three funds combined to generate $776.5 million for the state in 2014.

As of December 31, 2014, WSIB’s private equity portfolio had over $41.5 billion in committed capital across 233 active funds. Those active investments have produced $37.3 billion in returns.