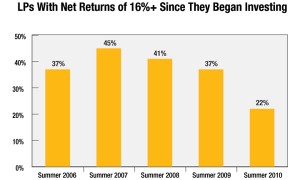 Limited partners still feel confident about the private equity asset class, even though more than half of them now have “lifetime portfolio returns of 10 percent or less,” according to the summer 2010 edition of ’s survey report, Global Private Equity Barometer.

Only 22 percent of LPs surveyed have net private equity returns of 16 percent or higher, versus the 37 percent that did in 2009. Forty-five percent of LPs had returns that high in the summer of 2007, according to the twice-yearly survey.

Despite the less-than-stellar returns, 20 percent of the 110 LPs surveyed globally by Coller Capital this spring said they intended to raise the portion of their portfolios dedicated to private equity, while only 13 percent intend to decrease it. The finding stands in contrast to last summer’s survey, which found that more LPs aimed to trim their private equity portfolios rather than expand them—a first-ever occurrence, according to the survey. In more good news for general partners, nearly two-thirds (64 percent) of LPs surveyed said they anticipate revving up their commitment pace to private equity during the next 18 months.

On the downside for managers, however, more than a third (38 percent) of North American LPs plan to shrink the number of relationships they have with GPs during the next two years. And, in a trend that could ultimately mean less business for managers, more and more LPs in the past several years have been making investments directly in companies. About half of the LPs surveyed said they are making direct investments today (versus only 35 percent in 2006), and 23 percent of those direct investments are proprietary, meaning LPs are making them on their own, not via a co-investment fund or program. During the next three years, 41 percent of those surveyed expect to grow their direct investment practices.

In terms of geography, LPs see a lot of promise in the Asia-Pacific region, according to the survey, with 41 percent of North American respondents intending to have more than 10 percent of their private equity allocation in the region over the next three years. Over the next two years, LPs feel that Australia will be the most attractive destination in the region for buyouts, followed by China and India, although the latter two will likely experience the largest inflows of investment capital, according to the survey.