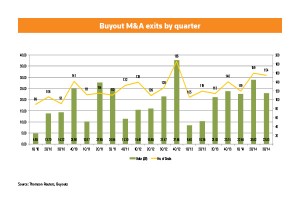 In the third quarter of 2014, the exit environment remained favorable for private equity-backed companies, particularly in the M&A market. The third quarter’s M&A exit count totaled 154, on par with the 159 recorded in Q2 and significantly higher than the 113 witnessed over the same period in 2013. On the IPO front, the number of public exits fell to nine from the 15 reported last quarter by Buyouts magazine and was largely dominated by the public offering of Alibaba Group Holding Ltd.

Thomson Reuters, until Oct. 3 the publisher of Buyouts magazine, tallied 50 M&A exits that disclosed their financial terms over the quarter. These transactions combined to reach $22.8 billion, with five deals surpassing the $1 billion mark. Despite this quarter’s dip in the value of M&A deals from Q2, the latest figure illustrates a continued rebound in M&A activity that began in Q3 2013 following the slump that characterized the market in the wake of the financial crisis.

The largest M&A deal of the quarter by value, including net debt, was the acquisition of the Alta Wind Energy Center of Terra-Gen Power LLC by NRG Yield Inc, a unit of NRG Energy Inc. The New York-based provider of renewable energy services was a unit of ArcLight Capital Partners LLC and the deal is estimated at $2.5 billion, consisting of the $870 million purchase of equity and the assumption of $1.6 billion in liabilities. By purchasing the largest wind farm in North America, NRG Yield Inc is helping its parent, NRG Energy Inc, build up its clean energy portfolio while complying with stricter air emission rules.

In a sweetened deal, AmSurg Corp acquired Sheridan Healthcare Inc, a Florida-based provider of specialist physician management services, from Hellman & Friedman LLC for approximately $2.4 billion. The deal consisted of an estimated $2.1 billion in cash and issuance of 5.7 million AmSurg common shares valued at over $284 million. The valuation of the shares was based off the closing stock price for AmSurg on July 15 at $47.02 per share. The terms of the initial offer consisted of $1.7 billion in cash and issuance of AmSurg common shares valued at $615 million.

Flint Hills Resources LLC, a subsidiary of Koch Industries LLC, acquired a 73 percent interest in PetroLogistics LP, a Houston-based manufacturer of propylene, from Lindsay Goldberg LLC, York Capital Management LLC, David Lumpkins and Nathan Ticatch for $12 in cash per share, or a total value of $1.2 billion. Concurrently, PetroLogistics acquired the remaining 27 percent stake that it did not already own for $14 in cash per share.

The remaining two deals valued over $1 billion were the result of the acquisition of a company’s entire share capital. The first, Shaw Communications Inc of Canada, acquired the entire share capital of ViaWest Inc, a Colorado-based provider of information technology services, from Oak Hill Capital Partners and GI Partners for $1.2 billion; the offer consisted of $830 million in cash and the assumption of $370 million in liabilities. In addition, Visma AS SPV, a special purpose vehicle comprised of HgCapital Trust Plc, Cinven Partners LLP, Kohlberg Kravis Roberts & Co LP, Storebrand ASA and Keskinainen Elakevakuutusyhtio Ilmarinen, acquired the entire share capital of Visma AS, an Oslo-based developer of software, from KKR for NOK 4.086 billion ($680.764 million), in a leveraged buyout transaction.

Alibaba and the $68 billion IPO

In ”One Thousand and One Nights,” Ali Baba learned the secret to entering the treasure den of 40 thieves with two magic words: “open sesame.” Just as its namesake in the story, Alibaba Group Holding Ltd had a magical entrance on the NYSE with an IPO of over $21.7 billion and the largest in U.S. history. Backed by Silver Lake Partners LP, Temasek Holdings (Private) Ltd, CITIC Capital Partners Ltd, China Development Finance Co Ltd, Yunfeng Capital, Boyu Capital Advisory Co Ltd, Mail.Ru Group Ltd and an undisclosed firm, Alibaba Group Holding Ltd is a China-based group of Internet-based e-commerce businesses and is responsible for 80 percent of online sales in the country.

On its first day of trading, shares in the company surged by over 40 percent and hit a high of $99.70 in active trading. Following its public debut on Sept. 19, the company is valued at over $169 billion, a valuation that is higher than iconic brands such as Walt Disney Co and Coca-Cola. The company is trading under the ticker BABA and closed on September 30 at $88.85 per share.

Another successful public debut for a private equity-backed company took place on July 31 when Catalent Inc had its IPO at $20.50 per share. Backed by the Blackstone Group LP and Genstar Capital LLC, the provider of advanced delivery technologies for drugs, biologics and consumer health products had an IPO size of $871.3 million. After selling 42.5 million shares, the company is valued at over $2.5 billion and is trading under the ticker CTLT on the NYSE. Since its debut, the stock price has risen 22 percent and closed at $25.03 on Sept. 30.

Overall, there were at least nine IPOs involving U.S.-based financial sponsors in the third quarter. The total combined IPO size was over $23.8 billion with the lion’s share belonging to Alibaba Group. However, the latest figures show a substantial increase in IPO activity by value when compared to Q2, when 15 private equity portfolio companies went public with a combined size of $9.8 billion.