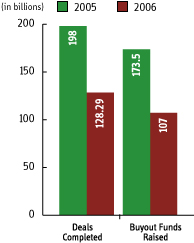 Nearly $5.5 billion in disclosed deals has been put to work by U.S. private equity firms since Buyouts last went to press. The lion’s share of that total came from The Blackstone Group, which recently completed its $4.3 billion buyout of Travelport, the travel distribution services unit of Cendant Corp. Other deals include the carveout of Flextronics International’s software development and solutions business by Kohlberg Kravis Roberts & Co. and Sequoia Capital—valuing the unit at about $900 million—and Allied Capital’s separate buyouts of BenefitMall Inc. and Coverall North America Inc. for a combined total north of $230 million. The year-to-date deal volume now stands at approximately $128.29 billion.

Meanwhile, PE firms have raised another $4.3 billion in recent weeks, bringing the total to more than $107 billion raised so far this year. Goldman Sachs reportedly is determined to rejoin the ranks of the largest buyout funds, and is said to be raising GS Capital Partners VI with a goal of $10 billion. The new fund comes only a year after Goldman closed its last large buyout fund with $8.5 billion. The secondary market continues to go strong, as London’s Coller Capital has closed on approximately $1.3 billion for Coller International Partners V, a secondary fund with a goal of $3.75 billion, according to documents filed with the Securities and Exchange Commission. Other firms in the news include Ashmore Investment Management, which closed on $1.3 billion for its new fund, Global Special Situations Fund 3.