Leading the charge was Aquiline Financial Services. The New York-based firm, which focuses on companies within the financial sector, raised more than $1.7 billion.

Meanwhile, Hamilton Lane’s Hamilton Lane Co-Investment Fund IV closed at $1.7 billion, which was above its initial target. The fund will make buyout and growth transactions alongside leading general partners.

Joining the fundraising frenzy was A&M Capital Partners, which raised more than $1 billion for its sophomore fund. The Connecticut-based firm makes control investments in the industrial and manufacturing sectors in North America and Western Europe.

Deal-making added $2 billion in the past two weeks, bringing the year-to-date total to $92.5 billion. That is down from the same period last year, when deal-making topped $100 billion. 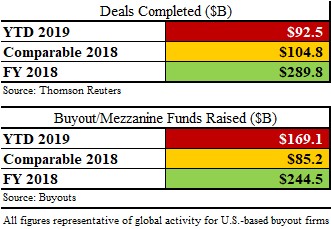