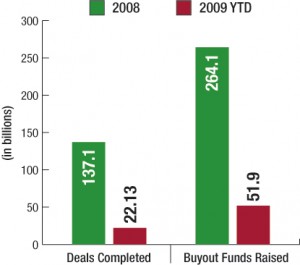 In all, U.S. buyout firms closed a total of 23 LBOs from Sept. 23 through Oct. 13, according to Thomson Reuters, publisher of Buyouts. Combined, the six transactions with disclosed financial terms added up to $11.7 billion and kicked our year-to-date deal volume total up to $22.13 billion.

The largest deal of the period was led by Delphi Holdings’s senior creditors and , through which the company acquired nearly all of Delphi Corp’s global businesses in a transaction valued at $10.98 billion.

Fundraising saw some significant performance as well. Mega firm closed with $8.8 billion (a lofty sum, though still below its $10 billion hard cap), and Menlo Park, Calif.-based closed its third fund, , with more than $1.9 billion.

Elsewhere in the market, has begun marketing its first traditional buyout fund, seeking to raise $300 million for with Capstone Partners serving as placement agent.

So far in 2009, buyout and mezzanine firms have secured $51.9 billion in capital commitments from investors.