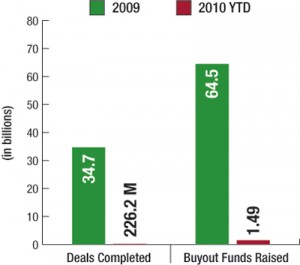 said it closed its eighth LBO fund with $5 billion in commitments, a majority of which was raised in 2008 and 2009. The New York buyout shop closed the pool of capital below its $7.5 billion hard-cap.

Mezzanine lender announced the closing of its second fund, , with $122 million—below its initial target of $250 million. The firm’s previous vehicle, formed as an SBIC fund, closed in 2004 on $199 million, including matching funds from the government.

Firms are active on the deal front, as well. U.S. buyout shops have closed a total of 20 control-stake deals this year through Jan. 12, according to Thomson Reuters, publisher of Buyouts. Combined, the five deals with disclosed valuations totaled $226.2 million.

The largest deal of the bunch was ’s $100 million purchase of Peopleclick Inc., a Raleigh, N.C.-based provider of workforce-management software, consulting and support services.

Next in line was TA Associates’s $87 million buyout of eCircle AG, a Munich-based provider of digital marketing services.