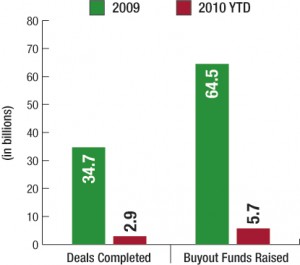 New York’s was a significant contributor to the latest tally, having secured $308 million from investors for its second fund, according to a recent SEC filing. has a $700 million target.

also added to the total, having collected $130 million for .

When it comes to spending money, the U.S. market is averaging about one LBO per day. In the past two weeks, U.S. firms closed 14 deals, according to Thomson Reuters, publisher of Buyouts. Combined, the two deals with disclosed valuations totaled $296.6 million, just barley nudging our year-to-date disclosed deal total to $2.9 billion. At this time in 2009, that total was $1.83 billion.

The largest deal in our recent tally was twofer led by . The New York firm purchased Pretium Packaging LLC, a maker of plastic packaging products, for an undisclosed amount, while Pretium—concurrent to that deal—acquired PVC Container group in a transaction valued at $200 million.