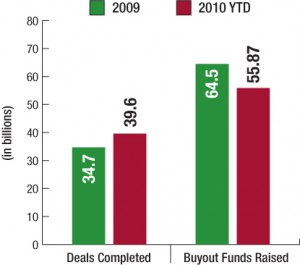 U.S.-based buyout and mezzanine shops have secured $55.87 billion so far this year. The figure is higher than the $48.9 billion obtained by the same time last year, when fundraising crawled. The fundraising total for the latest period includes $6.36 billion from mezzanine funds, which secured only $784.4 million during the comparable period in 2009.

The largest LBO during the third quarter of 2010 involved and . The shops acquired Interactive Data Corp., a Bedford, Mass.-based provider of financial information, from Pearson PLC’s Financial Times Ltd. subsidiary. The deal has a rank value of $3.03 billion. The next largest was by a management-led investor group that included and . It purchased First Republic Bank for $1.86 billion. ’s pick up of DynCorp International LLC for slightly more than $1.4 billion rounded out the third quarter’s top three LBOs.