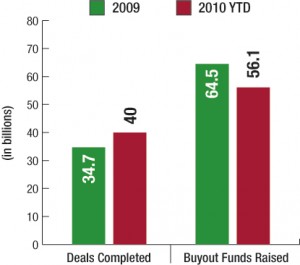 Domestic buyout and mezzanine shops have secured $56.05 billion in commitments so far this year. The start of the third quarter includes activities from a final closing to the planned launch of more investment vehicles. held the final close of its latest investment vehicle. The Greenwich, Conn.-based shop finished the fundraising drive of with $305 million in commitments. The target was $400 million. The firm makes control investments in the lower middle market in the consumer products, services, specialty retail and other sectors.

New York-based . is one of the shops coming back to the market. It plans to secure $500 million to $600 million for . The firm targets manufacturing, distribution and service companies with revenue of $40 million to $300 million.

Buyouts magazine’s publisher Thomson Reuters tracked 27 LBO deals from Sept. 29 to Oct. 12. The seven with known financial terms combined for roughly $1.4 billion. The year-to-date deal volume moved up to more than $40 billion.had the period’s top deal. It acquired a 51 percents stake in EVERTEC from Popular Inc., which retains a 49 percent interest. The transaction has a rank value of about $600 million.