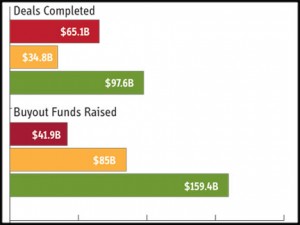 Among recent developments over the past two weeks, Apax VIII closed on $7.5 billion after Apax Partners revised down its original target of $11.8 billion (not included in our tallies because it is a European sponsor).

On the deal front, Thomson Reuters, the publishers of Buyouts, tallied 31 new deals among U.S. sponsors over the past two weeks. The aggregate value of those that disclosed terms this year increased to $65.1 billion from the $36.9 billion reported in our last issue. The latest figure far surpasses the $34.8 billion that was reached this time last year.

The most notable deal to have been completed was the acquisition of processed food supplier HJ Heinz Co by an investor group comprised of Berkshire Hathaway Inc and 3G Capital Partners Ltd for a total value of $27.4 billion. The leveraged buyout deal resulted in Berkshire and 3G each owning a 50 percent interest in HJ Heinz. Another notable deal was Sycamore Partners LLC acquiring the clothing and accessories chain Hot Topic Inc for $575 million.