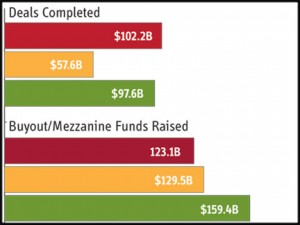 The latest fundraising figure includes the $44.2 billion raised in the latest quarter. Some of the more notable activities in the period include Bain Capital raising $4.8 billion for its eleventh flagship fund, well on the way to the $6 billion target, according to sources. Similarly, The Catalyst Capital Group reached a final close on its fourth fund at $812 million, well above the $750 million target.

Over the past two weeks, U.S.-based financial sponsors completed 65 deals with a total disclosed deal value of about $11.67 billion. In the past quarter, 375 deals were completed with a disclosed value of just over $29.14 billion, significantly lower than the $41.11 billion reported for the second quarter.

The largest transaction to close over the past two weeks was the acquisition of Apache Corp-Shelf Assets, a Houston- based oil and gas exploration and production company, by Fieldwood Energy LLC, a unit of Riverstone Holdings LLC for an estimated $5.25 billion.