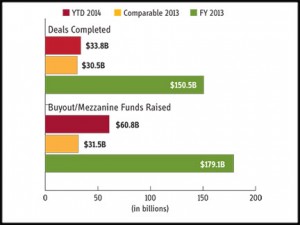 Bain Capital reached a final closed on its ninth fund at $7.3 billion, with $6.5 billion in commitments from outside investors. The flagship fund initially targeted $6 billion but fell short of its $7.5 billion hard cap. Also beating its target was GI Partners Fund IV, which held a final close at its hard cap of $2 billion and is set to make investments in North American mid-market companies.

On the deals front, Thomson Reuters, the publisher of Buyouts, counted 39 deals with U.S. financial sponsors closing in the last two weeks of April, bringing the total for the year to 497. Those that disclosed their financial terms added over $667 million in transaction value, resulting in $33.8 billion in overall deal value so far in 2014.

Highlights over the past two weeks included a leveraged buyout transaction where Warburg Pincus acquired an undisclosed majority interest in PayScale Inc, a Seattle-based provider of online compensation surveys for $100 million in cash.