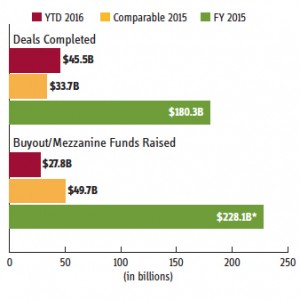 U.S.-based buyout and mezzanine fundraising cooled over the past two weeks, as the year-to-date tally stepped up only modestly to $27.8 billion from $25.5 billion. It now trails where we were at this time last year by about $22 billion.

With the launch of Vista Foundation Fund III, Vista Equity Partners has three funds in the market. The firm is aiming for $2 billion, with a $2.5 billion cap. Centerbridge Partners also has a new vehicle in the market, Centerbridge Special Credit Fund III, its third distressed credit fund. It will be split into two pools with a combined target of $5 billion.

After a quiet February, the completed deals side skyrocketed over the past two weeks. The 2016 total surged by $21.6 billion and now sits almost $12 billion ahead of this time last year. The largest deal was for Keurig Green Mountain Inc. The retailer of coffee and tea products was acquired by an investor group made up of Acorn Holdings BV, BDT Capital Partners LLC and Mondelez International Inc for $14.2 billion.

Another big deal centered on Solera Holdings Inc. The data processing service provider was absorbed by Vista Equity Partners for about $6 billion. The third-largest deal by disclosed value of the past two weeks was for the San Juan Basin gathering system of WPX Energy Inc. It was bought by I Squared Capital Advisors for $309 million.