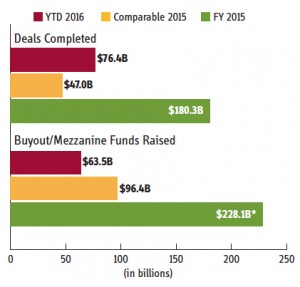 U.S.-based buyout and mezzanine fundraising was productive over the past two weeks, with the year-to-date total growing 19 percent to $63.5 billion from $53.3 billion. It’s shadowed, however, by 2015’s towering $96.4 billion raised at this time last year.

A pair of new firms called their maiden flagships back into port. The Trident Capital spinoff Sunstone Partners wrapped up its debut at $300 million. The growth equity firm will focus on healthcare IT, internet and marketing services, cloud and enterprise IT, and cybersecurity.

Deal-making also had a big half-month, seeing its year-to-date figure shoot up by $14.6 billion. The total for 2016 sits at $76.4 billion compared with $47 billion at this point last year.

Apollo Global Management was quite busy, conducting the two largest deals with disclosed value in the period. The top deal was for security system giant, ADT Corp, which sold for $12.3 billion. Following that was the $1.3 billion acquisition of Fresh Market Inc, an owner and operator of grocery stores. The third-largest deal was Blackstone Group absorbing 127 branch offices of consumer financier Springleaf Holdings Inc for $624 million. 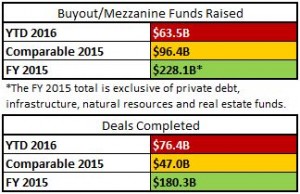