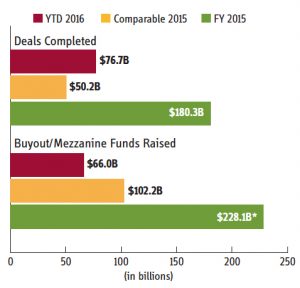 All was quiet on the fundraising front, as U.S.-based buyout and mezzanine added only $2.5 billion to its yearly sum over the past two weeks. The 2016 YTD total now sits at $66 billion, more than $36 billion behind last year’s torrid pace.

TPG Capital wrapped up its megafund, TPG Partners VII, at $10.5 billion, a full $500 million over target.

Pamplona Capital Management reached an even $1 billion for TMT Fund I — the TMT standing for its targeted investments of technology, media and telecom companies.

CenterOak Partners hit above the $400 million mark it set for its maiden vehicle. CenterOak Equity Fund I has collected $409 million. Whether it has reached a final close is unclear. CenterOak specializes in middle-market growth equity for the industrial sector.

Another firm raising its first fund is Latin-America-focused Australis Partners. It has pooled $310 million toward the $350 million goal for the debut.

On the mezzanine side, Oxer Capital has gathered $122 million for Oxer BCP Mezzanine Fund. 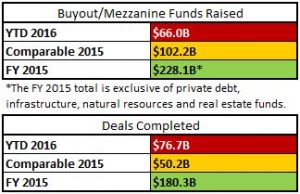