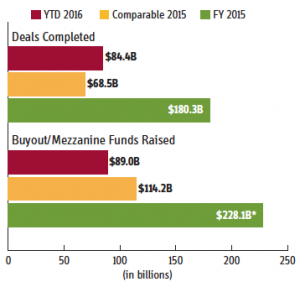 U.S.-based buyout and mezzanine fundraising rose alongside June temperatures in New York. In the past two weeks, the yearly aggregate grew by $16.5 billion, or 23 percent, bringing the 2016 year-to-date total to $89 billion. Even with the surge, the total now sits over $25 billion, or 22 percent, below this time in 2015.

Leonard Green & Partners found a lucrative endpoint for Green Equity Investors VII. The fund blew past its target and hard cap, finalizing on $9.6 billion in commitments. Golden Gate Capital also surpassed the target for its Opportunity Fund, piling up $4.7 billion for a $3.5 billion goal.

JP Morgan Asset Management amassed the largest mezzanine fund of the year, with just under $1.4 billion for Mezzanine Private Investors III. Gridiron Capital has now collected $665 million for its third main pool. Gridiron has yet to set a target.

Juggernaut Capital Partners rumbled to a $380 million final close —$30 million, or 8.6 percent, more than it targeted — for its third flagship.

Lone Star Funds reentered the fray by opening its 10th distressed primary vehicle. The Dallas firm is seeking $5 billion. Hitting the market for the first time was BlueArc Mezzanine Partners with its eponymous fund.

Deal-making slowed significantly, adding only $1.5 billion to its year-to-date.

Looking at the big picture, the high-tech sector is leading the way in completed transactions so far this year, with $23.9 billion in disclosed value and 120 deals. 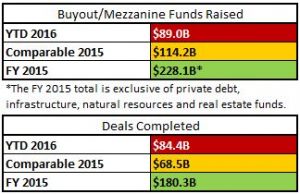