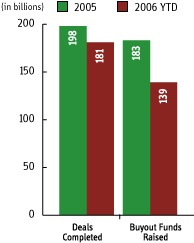 The numbers are in: U.S. private equity pros over the past three months put 259 control-stake transactions to bed for a disclosed total value of $56 billion. As such, the year-to-date deal volume total for 2006 now stands at $181 billion, put to work in 770 transactions. The biggest deal to close in the past three months was the $10.58 billion carveout of Royal Philips Electronics’ semiconductor business by a consortium that included KKR and Silver Lake Partners, followed by The Blackstone Group’s buyout of real estate shop CarrAmerica Realty Corp. The year 2006 is only $17 billion away from breaking last year’s record deal volume total of $198 billion.

The third quarter in fundraising was also a big one, with the last two weeks adding a good deal to the total. The $58 billion raised in the third quarter nearly doubled the year-ago pace. The year-to-date total is $139 billion for buyout and mezzanine funds raised by U.S. firms. Last year’s first-three-quarters’ total was $111 billion. Recent highlights were Berkshire Partners closing its $3.1 billion seventh fund and GTCR Golder Rauner closing its ninth fund at $2.75 billion. Looking ahead, Providence Equity Partners, Texas Pacific Group, Thomas H. Lee Partners and Goldman Sachs all are in the market with funds targeting at least $9 billion each.