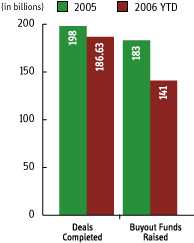 After a strong third-quarter close, U.S. private equity firms continue to pile on the deals. Since Buyouts last went to press, PE shops have closed another $5.63 billion worth of disclosed deals, kicking the year-to-date deal volume total up to a lofty $186.63 billion. For comparison’s sake, the deal volume total for this time last year was under $140 billion. Contributing to the past fortnight’s numbers is the $4.1 billion carveout of phone directory PagesJaunes from France Telecom by a consortium including Kohlberg Kravis Roberts & Co. and GS Capital Partners.

Meanwhile, the first few weeks of the fourth quarter have been relatively quiet on the fundraising front. Indeed, the total inched up a mere $2 billion to top off at its current $141 billion total. The biggest news was that The Carlyle Group would be trying to raise $15 billion for its next generalist private equity fund and €5 billion for its next European private equity fund. Also Lehman Brothers is reportedly planning to raise about £4 billion for a new private equity real estate fund. Recent closes included Golub Capital Partners’ first close of $700 million on its fifth mezzanine fund and Quintana Capital Group of Houston raising up to $650 million for an energy-focused fund.