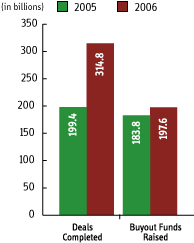 It’s safe to say that the fabled “exogenous event”—the market-destroying force that feared by buyout pros everywhere—did not occur in 2006. Last year Buyouts tracked a record-breaking 1,007 control-stake deals consummated by U.S. buyout firms. Of those, the 316 deals that donned disclosed values added up to a towering $314.78 billion, more than $150 billion more than 2005’s total.

Among the largest deals to close in 2006 were the $33 billion take-private of HCA Corp. and the $17 billion delisting of Freescale Semiconductor Inc. Meanwhile, 2007 already has more than $246 billion in disclosed deals awaiting consummation.

For fundraising, although the numbers came in at $197.56 billion for U.S.-based buyout and mezzanine funds raised in 2006, given the amount of undisclosed money changing hands it’s safe to say that fundraisers for LBO shops broke through $200 billion. Last year began with the first $10 billion fund—Apollo’s, was followed by the first $15 billion fund—Blackstone’s—and by the end of the next year will likely see the first $20 billion fund, from either Kohlberg Kravis Roberts, Blackstone or The Carlyle Group. The last two years have been the best ever for the industry. Seven of the top ten LBO funds ever raised were raised in 2006, the other three closed in 2005.