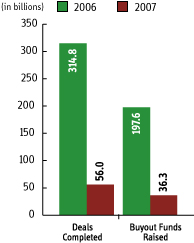 A single day in the past two weeks saw enough action to change the buyout market as we know it. On Feb. 09, 2007, Fortress Investment Group made history when it became the first buyout firm to go public on a U.S. exchange (see coverage inside). Hours later, The Blackstone Group cinched another deal for the history books when it closed the $39 billion take-private of Equity Office Properties Trust.

That deal is now the largest LBO completed to date, beating out last year’s $33 billion buyout of HCA Corp. and pushing the RJR Nabisco buyout to third. The delisting of EOP, along with an additional $6.54 billion in closed deals tracked by Buyouts over the last fortnight, brings our year-to-date closed deal total to $56.04 billion. For perspective, at this time last year, Buyouts had tracked only $8.54 billion in closed deals.

Meanwhile, fundraisers are looking to break records of their own. Goldman Sachs Capital Partners reportedly is planning to bust the current fundraising ceiling by raising upwards of $19 billion for its sixth buyout fund. Buyouts reported in January that that fund has already closed on more than $8.7 billion in commitments. Elsewhere, CarVal Investors LLC—the investment arm of conglomerate Cargill Inc.—is preparing to close on more than $5 billion for its first distressed investment fund, which appears to be the largest first-time vehicle ever raised. It’s also been reported that Warburg Pincus is prepping its tenth fund with a $10 billion target, and that The Blackstone Group is also seeking $10 billion for its sixth global real estate fund.