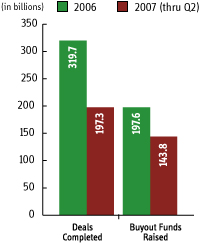 Deal volume in Q2 was at an all-time high, although the ebullient mood soured toward the end of the quarter as a number of large deals, including the carveout of Thomson Learning and the take-private of U.S. Foodservice, experienced difficulty pricing their bonds, stoking fears of a larger downturn.

Over the past three months, U.S.-based buyout firms closed a record-breaking 302 deals, edging out Q1 2007, which saw 283 done deals, as the busiest quarter in domestic LBO history, according to Thomson Financial and Buyouts. The consummation over the past three months of large deals like the $27.5 billion take-private of Kinder Morgan Inc. and the $6.9 billion LBO of Realogy Corp. helped kick Buyouts’ year-to-date disclosed deal total to $197.3 billion.

Fundraising by U.S. buyout firms for the first half of the year stormed up to $143.8 billion, a figure that includes a small amount of mezzanine commitments. The first half of the year was bolstered by the closure of a handful of huge buyout funds such as the $20 billion Goldman Sachs Capital Partners VI and the $12.1 billion sixth fund raised by Providence Equity Partners. Last year’s total was just short of $198 billion, as tracked by Buyouts. This year should easily eclipse it, becoming the third straight year of record fundraising levels.