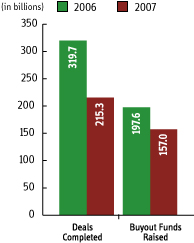 Although the debt market is sending ominous signals, deal pros are still closing their agreed-to transactions, beginning the third quarter with a flourish. The past fortnight witnessed the closing of about $18.03 billion in disclosed deals, including the $7.75 billion carveout of Thomson Learning by Apax Partners and OMERS Capital Partners and Kohlberg Kravis Roberts & Co.’s $7.3 billion take-private of Dollar General Corp.

Both of those deals had trouble pricing their original bond offerings. Other deals that closed since Buyouts last went to press include Westbrook Partners’ £490m ($985.5 million) buyout of Shell-Mex House and Hellman & Friedman’s $984.5 million acquisition of Iris Software Ltd.

After setting a record for fundraising in the first half of the year with $143.8 billion, 2007 continues to make 2006, a record-breaker, look as if it were just puttering along. Knowing no restraint, buyout firms upped their year-to-date tally to $157.0 billion. Highlights included Citigroup spin-out Court Square Capital Partners, which closed its second fund with $3.13 billion. Elsewhere, The Carlyle Group reportedly has closed on $8 billion of its $17 billion targeted fifth fund. The Riverside Co., meanwhile, has announced the close of its third European fund, topping off at €315 million ($435 million).