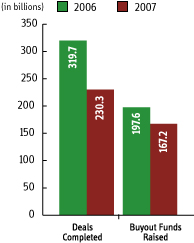 Despite the friction GPs face from the fiasco on the financing front, firms continue to finalize their deals. Indeed, the past two weeks saw U.S. buyout firms close about $15 billion in disclosed transactions, bringing Buyouts’ year-to-date disclosed deal volume total to $230.3 billion, compared to $119.4 at the same time last year. Recent closings include Clayton Dubilier & Rice’s $5.5 billion buyout of ServiceMaster Co., which had been rescued from bond-investor pushback by a bank-backed bridge loan.

The fundraising market, too, continues to chug along without apparent pause, as U.S. firms locked up about $10.2 billion in dry powder over the last fortnight. Among the recent closers are Fortress, which closed its fifth fund with $5 billion in capital commitments, and Advent International, which closed its fourth Latin America-focused fund with $1.3 billion. Others include Vector Capital’s $1.2 billion fourth fund and JMI Equity’s $600 million sixth fund, all helping to bring Buyout’s year-to-date fundraising total to a current $167.2 billion. Meanwhile, Bain Capital is coming back to market with a Roman numeral X fund that’s seeking $15 billion in commitments.