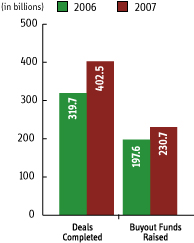 In the last two weeks, U.S.-based LBO shops closed 28 control-stake deals, and the seven with disclosed values were worth a total of $43.5 billion. Big deals of the last fortnight include The Blackstone Group’s $26 billion delisting of Hilton Hotels, the $8.3 billion take private of communications company Avaya by Silver Lake and TPG Capital and the LBO of Bausch & Lomb, for about $4.5 billion, by Warburg Pincus. That brings the year-to-date deal volume to $402.5 billion.

Meanwhile, it was a quiet few weeks in fundraising, as totals for the year inched up to $227.4 billion raised by buyout and mezzanine firms headquartered in the U.S. CCMP Capital, the former buyout and private equity team of JPMorgan Partners, closed its first independent fund with $3.4 billion in commitments.