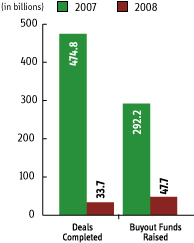 Deals, however, continued their slow pace so far in 2008. U.S.-based LBO shops completed a mere 25 transactions during the past week. Half a dozen of these deals carried disclosed values totaling nearly $5.5 billion, according to Thomson Financial, publisher of Buyouts.

Still, there were faint signs of a warming market, with three transactions valued at more than $1 billion closing during the last two weeks. The largest was Hellman & Friedman’s $2.5 billion LBO of Goodman Global. Other large-market deals included Vestar Capital Partners’s acquisition of Radiation Therapy Services Inc. for about $1.1 billion and TPG Capital LP’s purchase of Axcan Pharma Inc., a prescription drug maker and developer, also for about $1.1 billion. Year-to-date disclosed deal volume stands at $33.7 billion.