U.S.-based buyout and mezzanine fundraising continues at a strong pace. Since the last issue of Buyouts, fundraising added $21.9 billion to its YTD total, which now stands at $162.3 billion — nearly double the 2018 YTD total.

The biggest fundraiser was Advent International, which closed its ninth flagship on $17.5 billion. The fund surpassed its $16 billion target after only six months. Advent’s previous global fund raised $13 billion in 2016.

Crestview Partners was second in fundraising, with $1.9 billion for its fourth fund. The firm focuses on middle-market investments in media, financial services, energy and industrial sectors.

Coming in at No. 3 was Digital Colony, which added $1.4 billion to its current fund, which has amassed more than $3.8 billion.

Helping add to the surge was L Catterton, which added $442 million to its third Asia fund, which has now raised more than $1.2 billion.

Vivo Capital was another big fundraiser, adding $417 million to its ninth fund, which currently totals $1.3 billion.

High prices continue to hinder deal making. The YTD total stands at $89.6 billion, about $10 billion less than it was at the same time last year. 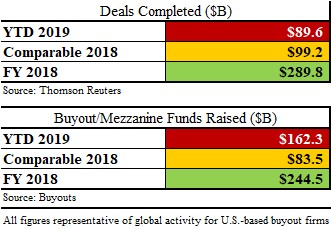