U.S.-based buyout and mezzanine fundraising added $3.6 billion to its yearly total over the past two weeks. That total now sits at $162.5 billion and trails the year-earlier period by $10.8 billion, or 6.2 percent.

A bevy of fund closings took place, most notably from Carlyle Group. Carlyle wrapped up its second Energy Mezzanine Opportunities Fund with $2.8 billion in commitments.

Juniper Capital Advisors’ sophomore fund finished at the hard cap, $500 million. Not far behind was Plexus Capital, which closed its Fund IV with $400 million in capital. Gemspring Capital hit the $350 million hard cap for its debut. The inaugural fund from the Westport, Connecticut, shop will focus on buyouts in the lower middle market.

Deal-making boomed over the past two weeks, stacking $9.1 billion to its yearly total. The tech sector dominated with the three top deals of the time frame, all eclipsing the billion-dollar threshold.

The largest was Apollo Global Management and Searchlight Capital Partners teaming to acquire Rackspace Hosting, the provider of web-hosting services, for more than $4.1 billion.

Francisco Partners LP and Elliott Management Corp followed by buying out Dell Software Group for $2.4 billion. Third was Vista Equity Partners buying the share capital of Infoblox, a data-processing and hosting-services provider, for a little under $1.3 billion. 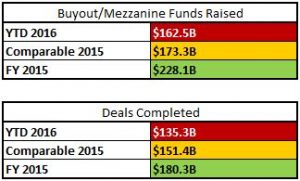