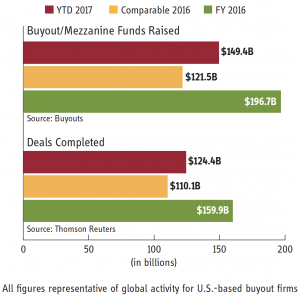 August is typically a slow month in private equity and 2017 was no exception.

U.S.-based buyout and mezzanine fundraising added only $2.2 billion since Buyouts last went to press. Thus far, $149.4 billion has been raised, leading this time a year ago by $27.9 billion, or 23 percent.

Seaport Capital Partners wrapped up its fifth fund at an oversubscribed $230 million. Fund V focuses on communications, media, business and information services in the lower-middle market.

Making its debut in the mezzanine scene, Gryphon Investors concluded the fundraising campaign on Gryphon Mezzanine Partners with a first-and-final close at its $100 million cap.

Of deals with disclosed value, a solitary transaction cleared the billion-dollar hurdle.

Centerbridge Partners acquired a majority interest in Syncsort Inc, a publisher of data-integration software, for just under $1.3 billion.

Following was HGGC completing a deal for Nutraceutical International Corp. The maker and wholesaler of nutritional supplements was bought for $416.9 million.

Blackstone Group also got into the mix, purchasing Global Sources Ltd, an internet-service provider, for $369.3 million.

H.I.G. Capital bought out the entire share capital of NCI Inc, a computer-facilities-management-service provider, for $266.9 million. 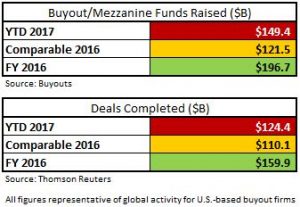