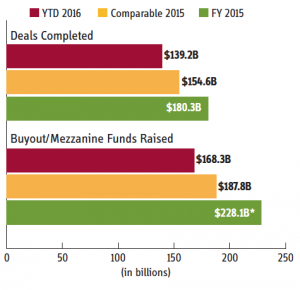 U.S.-based buyout and mezzanine fundraising added $5.8 billion to its yearly total over the past two weeks. That total now sits at $168.3 billion and trails the year-earlier period by $19.5 billion, or 10.4 percent.

A recent cavalcade of fund closings are led by L Catterton. The Greenwich, Connecticut, firm wrapped up its eighth flagship fund with $2.75 billion in commitments, surpassing its original $2.5 billion goal by 10 percent.

Another firm that exceeded target was Gryphon Investors. After adjusting the target on its fourth primary fund to $875 million from $600 million, expectations were still exceeded. Gryphon Partners IV held a final close at the $1.1 billion hard cap.

Pamlico Capital, which focuses on growth businesses in the lower middle market, also hit the hard cap on its fourth vehicle, with $910 million.

ParkerGale Capital blew by the $200 million target on its inaugural fundraise, closing on $240 million.

Deal-making wasn’t quite as lively, adding $3.9 billion to its yearly total since Buyouts last went to press. The year-to-date figure is $15.4 billion – or 10 percent – behind this time in 2015. 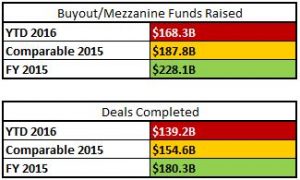