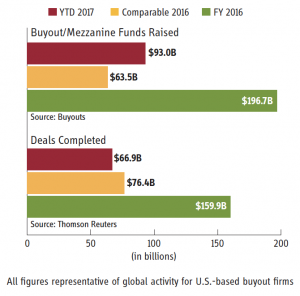 U.S.-based buyout and mezzanine fundraising kept rolling over the past two weeks. Since Buyouts last went to press, the yearly total grew $10.7 billion. Thus far in 2017, $93 billion has been raised, above the same time last year by $29.5 billion, or 46.5 percent.

Kohlberg Kravis Roberts led fundraising. KKR held a preliminary close on its third Asian Fund at $5.8 billion and expects to wrap it up this summer at an oversubscribed $9 billion.

HarbourVest Partners has amassed nearly $1.3 billion in commitments for its fourth co-investment vehicle. The Boston firm hasn’t listed a target.

BV Investment Partners reached the $750 million goal for its ninth flagship. BVIP Fund IX will invest in telecom, as well as the financial and information service sectors. Rubicon Technology Partners collected $526.8 million for its sophomore fund, on top of a $500 million goal.

Of the deals with disclosed value, a pair cleared the billion-dollar hurdle. The largest deal was conducted by Blackstone Group. The firm acquired Aon Hewitt’s benefits administration and human relations business process outsourcing for $4.8 billion.

American Securities followed with its buyout of Air Methods. The provider of emergency medical air transportation services went for about $2.5 billion. 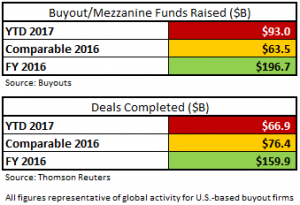