U.S.-based buyout and mezzanine fundraising received another big boost thanks to two megafunds. Since the last issue of Buyouts, fundraising added $15.9 billion to its YTD total, which now stands at $139.1 billion.

TA Associates led the charge. The firm’s 13th fund closed on its hard cap of $8.5 billion. The fund was oversubscribed and surpassed its original $7.5 billion target.

Not far behind was BDT Capital, which raised $6.3 billion for its third fund. The firm, founded by former Goldman Sachs banker Byron Trott, provides long-term capital. The Financial Times reported the fund’s target is $9 billion.

Adding to the fundraising frenzy was Old Ironside Energy. The Boston investor in oil and gas in Canada and the U.S. raised $389 million for its third fund, bringing the fund’s total up to more than $843 million.

In second was KKR’s acquisition of Magneti Marelli, a manufacturer of motor vehicle electrical equipment, from Fiat Chrysler Automobiles for $6.5 billion.

Third was another KKR deal. For $1.4 billion KKR acquired the stake it didn’t own in software publisher MYOB Group from Manikay Partners. 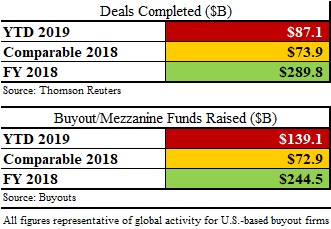