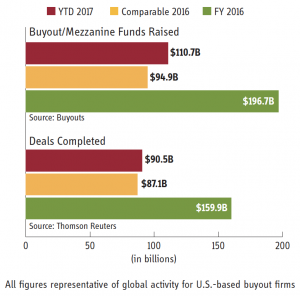 U.S.-based buyout and mezzanine fundraising slowed in advance of the dog days of summer. Over the past two weeks, the yearly total grew by only $1.6 billion. Thus far in 2017, $110.7 billion has been raised, leading this point last year by $15.8 billion, or 16.6 percent.

Platte River Equity wrapped up its oversubscribed fourth fund at its hard cap of $625 million. The Denver firm focuses on a bevy of sectors, ranging from aerospace and transportation, to energy and chemicals, to agriculture and minerals.

Dealmaking remained steady and consistent since Buyouts last went to press, seeing its total grow by $4.9 billion. The yearly aggregate now sits at $90.5 billion, ahead of 2016’s total by $3.4 billion, or 3.9 percent. A pair of deals cleared the billion-dollar hurdle.

Blackstone Group was next up with its tandem deal with M7 Real Estate. The investor group bought the German property portfolio of Hansteen Holdings, a European REIT. The buyout was for a little under $1.1 billion. 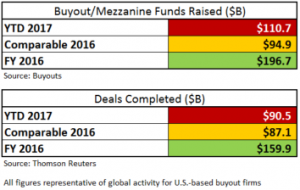