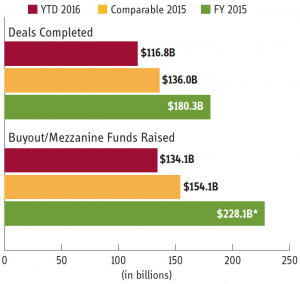 U.S.-based buyout and mezzanine fundraising continues to spike, having piled up $12.6 billion in the past two weeks. This year’s sum is gaining on 2015’s towering amount and now sits just $20 billion — or 13 percent — below this time last year.

Swander Pace Capital hit $510 million for its sixth primary fund, going 28 percent beyond the $400 million target. In the shallow end of the pool, Spell Capital Partners, a shop focused on small deals of $10 million to $50 million, concluded its Fund V, raising $65 million against a $50 million target.

Apollo Global Management was responsible for the majority of the charge. Apollo bought out Diamond Resorts International Inc, an owner and operator of Las Vegas hotels, for nearly $3.1 billion.