TPG led the charge, raking in more than $13 billion. About $11 billion of that came by way of its eighth flagship fund, and another $2.5 billion came via a sidecar vehicle. The sidecar fund will be TPG’s first separate fund raised specifically for healthcare investments, Buyouts reported last year.

The second-largest fundraiser was Warburg Pincus, which raised $4.25 billion for its sophomore China-Southeast Asia fund. It will focus on Chinese and Southeast Asian companies alongside the firm’s $14.8 billion growth fund.

In third place was Gryphon Investors, which closed its fifth fund at $2.1 billion, beating its original target of $1.5 billion. The fund will focus on business services, consumer products and services, healthcare, industrial growth and software.

Deal-making continued its slow pace. It added about $5 billion, bringing its year-to-date total to $97.4 billion, a decrease of 22 percent from where it stood at this time last year.

The largest deal belonged to KKR, which acquired the anatomical pathology business of Thermo Fisher Scientific for $1.1 billion. 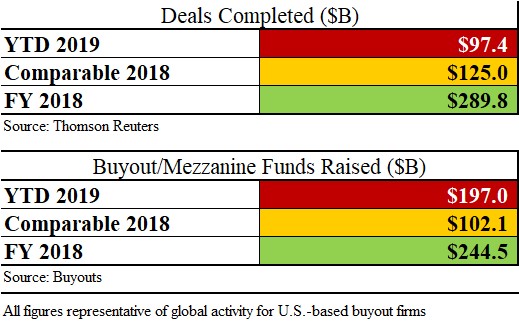