U.S.-based buyout and mezzanine fundraising had another huge boost, continuing a strong push to start the fourth quarter of 2019. Since the last issue of Buyouts, fund managers added $18.4 billion to its year-to-date total, now at more than $269.5 billion.

Veritas Capital was not far behind, closing its seventh flagship on $6.5 billion, beating its initial $5 billion target. The fund will invest in technology-focused companies that provide products and services to government-related and commercial customers.

TPG Capital had its own fundraising frenzy. The firm added another $800 million across its eighth flagship, which held its final close at $11.5 billion, and its debut healthcare fund, which closed on $2.7 billion. Both funds outraised their original targets.

But that was just the start for the Fort Worth- and San Francisco-based firm. TPG Sixth Street Partners hit its $2.2 billion cap for its first capital solutions fund. TPG also raised an additional $1.7 billion for its second growth equity vehicle, The Rise Fund II.

It continues to be a slow year for dealmaking, which added only $3 billion since the last issue of Buyouts. Its year-to-date total now stands at $151.1 billion.

The largest deal was the only one to break the billion-dollar threshold. Guidehouse, a unit of Veritas Capital, merged with Navigant Consulting Inc, a Chicago-based provider of management consulting and corporate finance services, for more than $1 billion. On completion, Navigant was delisted on the New York Stock Exchange. 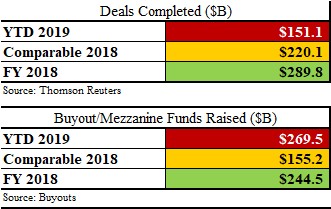