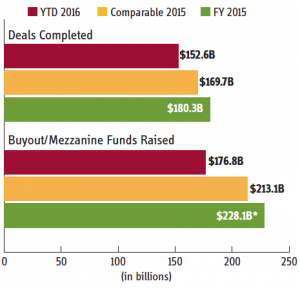 U.S.-based buyout and mezzanine fundraising added $8.5 billion since Buyouts last went to press. The total now sits at $176.8 billion and trails the year-earlier total by $36.3 billion, or 17 percent.

Solace Capital Partners had a successful first fundraise, wrapping up its maiden fund on $576 million, above the $500 million target. KarpReilly hit the $200 million target and closed its third primary fund.

EnCap Investments returned to the fold just two years after its previous flagship. Its Energy Capital Fund XI seeks $6.5 billion in commitments. Another firm back on the fundraising trail is Brentwood Associates. The consumer-focused shop is aiming for $750 million for Fund VI. Emerging manager Astra Capital Management, based in Washington, is targeting $250 million for its debut fund focused on communications and technology.

Of the deals with disclosed value, a pair reached the $4 billion level.

Emerson Network Power, which makes communications and network products, was bought out by Platinum Equity for $4 billion.